Rapids of the Hudson River

The Rapids of the Upper Hudson River

What causes the rapids?

1.) Obstruction - to block or close up with an obstacle; make difficult to pass.  An example of this are submerged, or semi-submerged rocks and boulders.

2.) Constriction - to draw or press in; cause to contract or shrink; compress.  An example of this is where, in some places the riverbanks are close together and the whole flow of the river needs to pass through a narrow section.

3.) Descension (Descent) - the act of moving from a higher to a lower position.  An example of this is seen in places where the river descends more quickly than in others, flowing downhill faster in some places than others.  In extreme cases, this might be exemplified by the river flowing over a waterfall.

Water has the property of cohesion.  This is to say that it sticks to itself and happily flows along with the quintillions of water molecules around it, this might be a brook, a creek, or even a river.  When all of this connected water hits an obstacle, like a submerged boulder, the cohesion is temporarily broken and air becomes temporarily trapped in the flowing water making the water opaque and giving it a white appearance.  Both descension and constriction cause the river to move more quickly.  The faster the water is moving, the more likely it is to lose it’s cohesion when encountering an obstacle.

What are the classes of rapids?

The intensity of any given whitewater rapid or river feature is generally referred to by roman numeral and are rated by class from I(1) to VI (6).


To put it into perspective, on the Upper Hudson, in the summer, the hardest rapids we paddle are Class III.  In the spring, at higher water levels, we see some Class IV.   There are some nearby rivers with more Class IV rapids, like the Moose River in Old Forge, NY and the Boreas River near Minerva, NY, but these are both weather dependent and generally run at a raft-able water level in the spring.

What classes are the specific rapids in the Upper Hudson Gorge?*

*Note:  These characterizations depend on the water level.  At high water, it's best to treat every rapid as a class IV since the area is so remote and the potential for flipping a raft and taking a long swim is ever-present.
Location: 100 W Main St, Indian Lake, NY 12842, USA 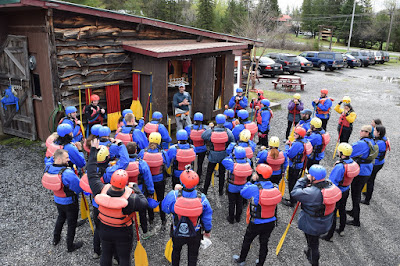 Posted by Adirondac Rafting Company May 16, 2017

Raft the Adirondacks: Step by Step